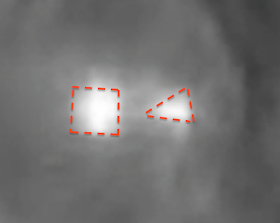 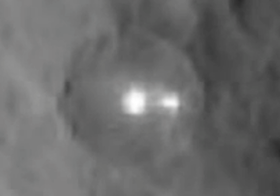 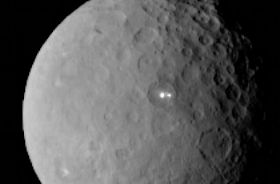 This photo was taken by Dawn spacecraft from 29,000 miles away. This light was seen that far and then some. Scientists are baffled at what it could be, but let me shed some light on it, no pun intended. The light is white, like city lights, not orange or red like a volcano. That rules out volcano. The light is not one, but two. You will see the two glowing objects have different shapes. The largest is a white glowing square, the smaller is a triangle. Still think its a volcano? Ceres is the largest object in the asteroid belt and is only 950km in diameter. These are massive doors that open to allow ships in and out. Yes, I'm saying Ceres was turned into a alien space station...where they live inside...underground where its safe. Its surface covered in dust, dirt, that protects the station below from attacks, meteorites and radiation. Death star comes to mind? SCW

The discovery of a bright spot on Ceres has given rise to lots of speculation. And now we've learned something new: it has a friend. The second spot is not quite as bright, but still weirdly reflective compared to the rest of the dwarf planet. And one scientist has a possible explanation for both of these bright spots.

Top image: From photographs taken on February 19, 2015 at 46,000 kilometers away (29,000 miles), Dawn can finally see that the mysterious bright spot on Ceres is in a basin, and has a smaller, dimmer companion. (more at source)