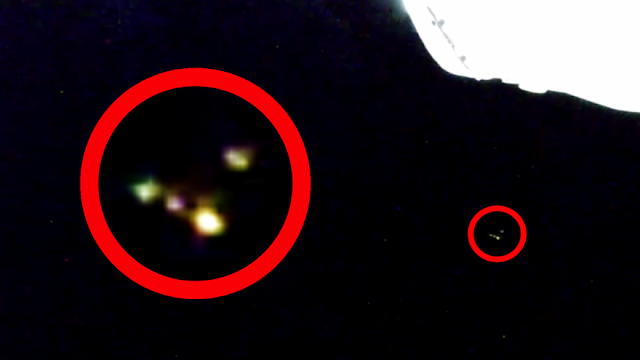 Date of sighting: May 19, 2021
Location of sighting: Space Station
Source: https://video.ibm.com/recorded/129895972
I was watching the HD live International Space Station cam when the day soon turned into night and then suddenly a glowing triangle appeared. The object had four glowing lights on it and the colors ranged from green, purple and yellow. Although it looks like four different objects, when I enhanced it adding light...it was obvious that there was a center area linking all the lights.
Recently the US government released a video in night vision of several triangle shaped craft flying around a Navy ship. Todays sighting only compounds the evidence on that subject. This ISS recording is 100% proof that aliens were near the space station today. Right now...is a tipping point for humanity. The Doomsday Clock is close to midnight. China wants war with the world, and the world is ready to give it to them. Covid19 has killed over three million people and the mutant strains may kill the remaining humans if were cant stop it from spreading. This...living on the edge mentality...is what aliens are highly interested in. By studying humanity now...dealing with the worst case scenarios, they can determine if we are ready be allowed to expand into the universe or not. Yes...it's not our decision. But the world is putting its best foot forward, fighting the noble fight, win or lose, we will try our best.
Scott C. Waring - Taiwan
Scott C. Waring at 5/19/2021 05:07:00 PM
Share