The two above photos are the same, I added color to allow you to see the building.

This is the 3rd photo that I found structures in on Mercury. This photo is not a black and white photo, but an infrared photo. The Mariner 10 had an "8-postition filter wheel." Each filter allows the camera to take a different kind of photo. Infrared allows you to see things the human eye cannot.

These structures were not built yesterday, but most likely have been there thousands or more years. Time is of little importance to ancient aliens because they do not age like we do. Their anatomy is totally under their control allowing them to decide what age to be, alter their appearance and more. So building a structure so massive...although it may take a hundreds of years...its of little consequence too them.

I took the original photo and enlarged it +200% allowing this incredible view of the surface of Mercury. I wonder if any of the doubters or skeptics have tried this? Or are they too busy being paid by the NSA to leave negative feedback, comments and such across the internet when actual evidence arrises? I know you skeptics are paid NSA employees!
The top and bottom photos are the same, I just added color so you can see it better.
Please look carefully at these structures that I found. They are not there to fool, confuse, infuriate you or anything else...I just want to raise humanities level of awareness of the amazing things around us. These are real structures on a real planet...not far from our own. 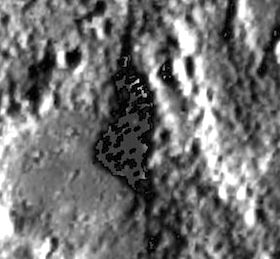 To and bottom photo are the same, I added color so you can see it better.
To the inhabitants on Mercury, I humbly ask that forgive humanity for its shortcomings. The good far outweighs the bad I assure you. I am sure you have rules of non interference when it comes to visiting earth...but to reject an invitation would be rude non the less and that would be a terrible way to start out a relationship. So...lets dance you and I. Much to talk about and much to learn from you.
Scott C. Waring-Taiwan